So when I graduated from seminary (EARLY MORNING), I got a Texas charm that I have worn on a necklace almost non-stop. It's been over five years, and it's still there. I get a lot of crap for it, but I know it's cause deep down they know everyone hates their state. They're bitter. I don't let it get to me. I really wanted one just like it but diamond encrusted for my wedding...but I didn't act on that fast enough. I really should've done that. Is should've not a word? Firefox is telling me that it's not. Whatever. It is. 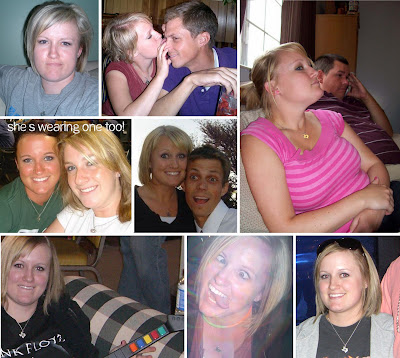 I really like when people see my necklace and say, "So...are you from Texas?" No, I just like the shape.

For all of you people from loser states that never find necklaces as fly as mine, you are now in luck. They even put a star on the city you want. I kinda want one just for that. Shwiiiing!

They're really excited for you.
Written for you by Kari at 6:53 PM

We don't think Utah is a loser state. Us from Utah like it alot. We don't blame you for loving Texas so why can't you appreciate our love for ours???

I'm saying all states other than Texas are loser states. But I don't REALLY think they are.

i think you are just needing to make up for my "lack" of swearing..thanks for thinking of both of us :P haha p.s. i tagged you...look at my blog to see!! hahaha

thanks for correcting(haha) seriously...i'm kinda embarrassed you had to! :P

i think your necklace rocks.

none of them are as cute as yours!! yours has a heart doesn't it? besides...i got no utah pride.

should've is a word. that bugs me too.

and finally, thanks for your sweet comments. :)

ok...you serioulsly have music from Cranberries "bury the hatchet" album? i thought i was the only person in the country that has that Cd! are you a cranberries fan like me? I've got all of their cd's

Well .. since you LIVE in UTAH right now AND you have for a WHILE ... maybe you should get a UTAH necklace. HA HA Take that .. Utah Freakin Rocks .. Like totally .. ha ha

YOU get a Utah necklace if you love it so much!