This is the most recent picture of me. 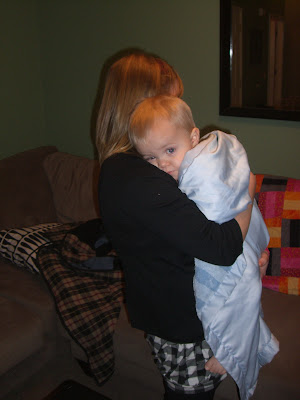 Beck has been sick, and man has he been sad. You can tell he's sad and tired because he never lays his head down on your shoulder.
15 interesting facts? This is always hard, and I recently had to write some, so this will different. It'll be more like 15 things that come to my mind.
UNO: I get ingrown toenails a lot. I just dug one out. (Thanks for the technique, Mandeigh!)
TWO: When I was little, I had an ingrown toenail and had to play a soccer game. After the game, I took my sock off, and it was bloody and puss-y.
TRES: Beck just went to sleep without a binky. Hell yeah. (Since he's sick, he has a stuffy nose and can't use it because he can't breathe with it in, so I thought it was perfect timing to take it away. Only five months after I wanted to take it away, but whatev.)
CUATRO: I'm watching a neighbor kid for a little while, and I'm scared that it's going to ruin #tres.
CINCO: The other day I was thinking, "I'm so glad no one asks me to watch their kids because I just don't know what to do with other people's kids."
SEIS: But this kid is so good! So I don't mind.
SIETE: When I was younger, I probably babysat like three times.
OCHO: In high school, I would talk in Spanglish. I'd just throw in any Spanish word I knew.
NUEVE: Yes, I did notice that I wrote TWO instead of DOS. Did you?
DIEZ: Am I spelling these numbers right? I just looked them up, so now they should be.
ONCE: I ♥ nap time.
DOCE: It's funny how you really like your kid, but you also really want a break from him/her for a little while.
TRECE: I got a Polar heart rate monitor that calculates how many calories I've burned. 893 since 9 this morning.
CATORCE: Counting calories sucks.
QUINCE: My scale told me I lost 27 pounds since the other day. I'm gonna call BS.
Written for you by Kari at 5:00 PM

Perhaps "puss-y" would've been a better, more phonetically appropriate spelling to use?

Oh, is Beck still feeling like that picture? I hope not. I laughed a lot at your comments. And I enjoyed learning how to count in Spanish. Kari, you make me laugh and I love you.